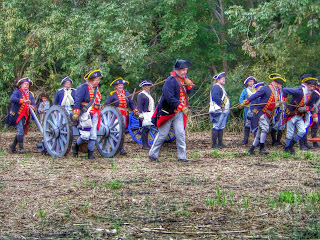 Liberty's Kids episode number 10, Postmaster General Franklin.  Gives you a great idea of the events that led up to the final victory in Yorktown, Virginia.  Just before that final battle and very much a part of it was the Battle of the Hook that took place in Gloucester, Virginia.  It was part of the strategy of General George Washington to surround Lord Cornwallis at Yorktown.  Gloucester, Virginia is just across the river from Yorktown.  The Battle of the Hook was a part of cutting off and surrounding the enemy.

That is why the Battle of the Hook is such a big deal.  The upcoming reenactment battle is very much a part of the celebration of our freedoms, liberty and independence and remembering what our forefathers did for us all.


Gloucester, Virginia Crier - Battle of the Hook from Chuck Thompson