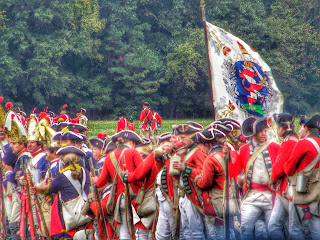 Washington Takes Command is episode number 11 for Liberty's Kids.  These are the events that led up to the Battle of the Hook that happened only days before the victory in Yorktown, Virginia.  The Battle of the Hook was part of the strategy of Washington and allies to cut off all escape routes for Lord Cornwallis.  Gloucester, Virginia is just across the river from Yorktown and was part of Lord Cornwallis plans for an emergency escape.

After the British surrendered in Yorktown, they then surrendered in Gloucester, Virginia.  The history books seem to overlook this fact.  In celebration of the Battle of the Hook, there is a major reenactment coming to Gloucester here very soon which is why we are calling the Liberty's Kids videos here a pre show.


Battle of the Hook from Chuck Thompson