Liberty's Kids episode number 24.  Valley Forge.  Here you get to see some of the many early struggles faced by the continental army. 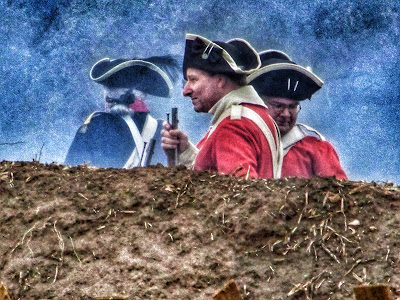 Washington, unable to risk a battle, was rapidly retreating through New Jersey. On the 28th of November Cornwallis advanced upon Newark, and Washington fell back upon New Brunswick. On the first of December, as Cornwallis reached the latter place, Washington broke down the bridge over the Raritan, and continued his retreat to Princeton.

The terms of service for which his troops had been enlisted were now beginning to expire, and so great was the discouragement wrought by the accumulation of disasters which had befallen the army since the battle of Long Island that many of the soldiers lost heart in their work. Homesickness began to prevail, especially among the New England troops, and as their terms expired it was difficult to persuade them to reënlist. Under these circumstances the army dwindled fast, until, by the time he reached Princeton, Washington had but 3,000 men remaining at his disposal.

The only thing to be done was to put the broad stream of the Delaware between himself and the enemy, and this he accomplished by the 8th, carrying over all his guns and stores, and seizing or destroying every boat that could be found on that great river for many miles in either direction. When the British arrived, on the evening of the same day, they found it impossible to cross. Cornwallis was eager to collect a flotilla of boats as soon as practicable, and push on to Philadelphia, but Howe, who had just joined him, thought it hardly worth while to take so much trouble, as the riverwould be sure to freeze over before many days. So the army was posted—with front somewhat too far extended—along the east bank, with its centre at Trenton, under Colonel Rahl; and while they waited for that “snap” of intensely cold weather, which in this climate seldom fails to come on within a few days of Christmas, Howe and Cornwallis both went back to New York.