The Battle Extends Into Spain Now

http://en.wikipedia.org/wiki/Bernardo_de_G%C3%A1lvez  This is the Wiki on Galvez with all the information.

The criticism to be passed on the conduct of this summer campaign by the British Ministry is twofold. In the first place, it was not ready according to the reasonable standard of the day, which recognised in the probable coõperation of the two Bourbon kingdoms, France and Spain, the measure of the minimum naval force permissible to Great Britain. Secondly, the entrance of Spain into the war had been foreseen months before. For the inferior force, therefore, it was essential to prevent a junction,—to take an interior position. The Channel fleet ought to have been off Brest before the French sailed. After they were gone, there was still fair ground for the contention of the Opposition, that they should have been followed, and attacked, off the coast of Spain. During the six weeks they waited there, they were inferior to Hardy's force. Allowance here must be made, however, for the inability of a representative government to disregard popular outcry, and to uncover the main approach to its own ports. This, indeed, does but magnify the error made in not watching Brest betimes; for in such case a fleet before Brest covered also the Channel.

With regard to the objects of the war in which they had become partners, the views of France and Spain accorded in but one point,—the desirability of injuring Great Britain. Each had its own special aim for its own advantage. This necessarily introduced divergence of effort; but, France having first embarked alone in the contest and then sought the aid of Spain, the particular objects of her ally naturally obtained from the beginning a certain precedence. Until near the close of the war, it may be said that the chief ambitions of France were in the West Indies; those of Spain, in Europe,—to regain Minorca and Gibraltar.

In this way Gibraltar became a leading factor in the contest, [pg 121]and affected, directly or indirectly, the major operations throughout the world, by the amount of force absorbed in attacking and preserving it. After the futile effort in the Channel, in 1779, Spain recalled her vessels from Brest. "The project of a descent upon England was abandoned provisionally. To blockade Gibraltar, to have in America and Asia force sufficient to hold the British in check, and to take the offensive in the West Indies,—such," wrote the French government to its ambassador in Madrid, "was the plan of campaign adopted for 1780." Immediately upon the declaration of war, intercourse between Gibraltar and the Spanish mainland was stopped. Soon afterwards a blockade by sea was instituted; fifteen cruisers being stationed at the entrance of the Bay, where they seized and sent into Spanish ports all vessels, neutral or British, bound to the Rock. This blockade was effectively supported from Cadiz, but a Spanish force of some ships of the line and many small vessels also maintained it more directly from Algeciras, on the Spanish side of the Bay of Gibraltar. The British Mediterranean squadron, then consisting only of one 60-gun ship, three frigates, and a sloop, was wholly unable to afford relief. At the close of the year 1779, flour in Gibraltar was fourteen guineas the barrel, and other provisions in proportion. It became therefore imminently necessary to throw in supplies of all kinds, as well as to reinforce the garrison. To this service Rodney was assigned; and with it he began the brilliant career, the chief scene of which was to be in the West Indies.

Historical account of navel conflicts during the American Revolution. 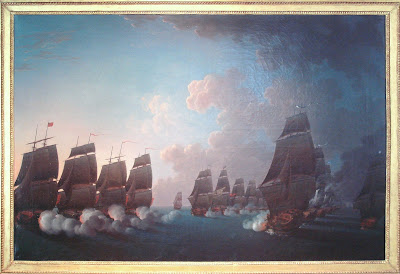