If you’ve been primarily a reader of the mainstream press, you’ve probably been misled into thinking genetically engineered (GE) crops are the greatest thing since sliced bread, that they provide better yields of equal or better quality food, pest and weed resistance, reduced reliance on pesticides, and more... But thankfully, the truth is unfolding and the tide is finally beginning to turn.
I have long warned against GE crops, pointing out the risks associated with their consumption, and the falsehoods presented about their safety. Now, the mainstream press is finally joining in.
The Fox News report above does a remarkably good job of questioning the logic behind, if not safety of, GE foods and genetically modified organisms (GMOs)—from crops with built-in pesticides, to salmon designed to grow abnormally large and fast.
I’m very pleased that Fox News pointed out the fact that potential health hazards cannot be averted simply by avoiding the GE crop in question. Animals raised on GE-grain feed will in turn produce GMO-tainted meat, milk, and eggs, for example, thereby affecting the vast majority of the food supply.
Fox News even reported the disturbing findings from feeding studies showing intestinal damage in animals fed Bt corn, and the potential links to food allergies, antibiotic exposure, and increased exposure to pesticides.

Even though Prop 37 in California last November just missed passing, it generated enormous amounts of exposure on this issue, far more than what was spent on the campaign. That exposure will be the catalyst to our eventual victory.
In the past few weeks, Connecticut and Maine have passed GMO-labeling bills, and 20 other states have pending legislation to label genetically engineered foods. So, now is the time to put the pedal to the metal and get labeling across the country—something 64 other countries already have.
I hope you will join us in this effort. In November, Washington State will vote on GMO labeling. Please help us win this key GMO labeling battle and continue to build momentum for GMO labeling in other states by making a donationto the Organic Consumers Association (OCA).


Is Monsanto Losing the Press?

Statistics showing skyrocketing increases in pesticide use due to resistance is just one problem that demonstrates the abject failure of GE crops. In a recentMother Jones article2, Tom Philpott lists some mainstream reporters that have come down hard on Monsanto and their biotech allies in recent weeks, most of them highlighting the growing pest and weed resistance these crops have produced.
For example, NPR’s agriculture reporter Dan Charles recently reported3 on the high increase in pesticide use following the failure of Monsanto’s Bt corn, engineered to contain the bug-killing gene of the bacteria Bacillus thuringiensis—which essentially turns the corn plant into a pesticide itself. Ian Berry writing for the Wall Street Journal4 has also reported on the “comeback” of pesticides, as “Mother Nature outwits genetically modified seeds.”
The following graph, from the Food and Water Watch dramatic report titled: Superweeds: How Biotech Crops Bolster the Pesticide Industry5, published earlier this month, illustrates the dramatic increase of pesticide use as resistance began taking hold in the early 2000’s. According to their report, use of 2,4-Dichlorophenoxyacetic acid (2,4-D), a broadleaf herbicide and the active ingredient in the infamous Agent Orange (another Monsanto disaster), has also more than doubled since 20026. 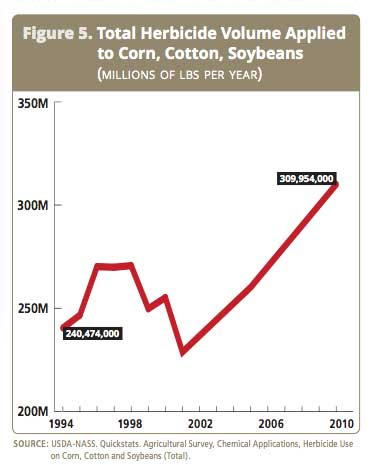 There are other signs of progress as well. The restaurant chain Chipotle, for example, now lists GE ingredients used in their meals on their web site. This victory was achieved by the blogger and food activist Vani Hari, who has investigated the products sold by a number of major restaurants and food companies, including Chipotle, Starbucks, Subway and Kraft.
Whole Foods has also promised to label GMOs sold in their stores within the next five years. This long lead time is required primarily because of their meat products, which is an enormously long and complex chain to certify. Despite the five-year deadline, this announcement is incredibly encouraging and represents a major sign that all the efforts most of you put into the California Proposition 37 campaign have paid off. We may have lost that battle but this, and other, signs strongly suggest we arewinning the war.
Then there’s the GE wheat debacle, which has raised questions about accountability and sparked alarm among Washington traders. When the blame started shifting too heavily onto Monsanto (where it rightly belongs), the company concocted one of the weirdest conspiracy theories out there7. The company basically wants you to believe that some anti-GMO saboteur collected and saved GE wheat seeds from their test plots a decade ago, and then sprinkled them in an Oregon wheat field as an act of sabotage... Yeah, right.

Pest and Weed Resistance Is Flourishing

After years of assurance that genetically engineered crops are the answer to pesky pest problems, corn rootworm is now turning into a nightmare for farmers and biotech companies alike, as the insects are developing resistance to the Bt gene in the crop that is designed to kill them. It didn’t take all that long for the bugs to develop their defenses and render the genetic manipulation useless either—only about 10 years from the introduction of Bt crops.
This is particularly tragic as very simple measures like the incorporation of biochar and the regular application of compost teas are far superior to GMO technology and also increase the soil vitality, rather than decimate it like GM crops do.
Last year, 22 of America’s top experts on corn pests urged the U.S. Environmental Protection Agency (EPA) to take action "with a sense of some urgency8.” They also urged seed companies to stop routinely inserting anti-rootworm genes into their corn lines to prevent devastating losses. The economic impact could be huge. Billions of dollars are at stake as Bt-stacked corn varieties account for 71 percent of all corn grown in the US9 as of 2013—up nearly 20 percent from 2012.

“It appears that farmers have gotten part of the message: Biotechnology alone will not solve their rootworm problems,”DanCharles writes. “But instead of shifting away from those corn hybrids, or from corn altogether, many are doubling down on insect-fighting technology, deploying more chemical pesticides than before.

Companies like Syngenta or AMVAC Chemical that sell soil insecticides for use in corn fields are reporting huge increases in sales: 50 or even 100 percent over the past two years... As a result, [the farmers] may just keep growing corn, fighting rootworms with insecticides — and there's a possibility that those chemicals will eventually stop working, too.” [Emphasis mine]


http://articles.mercola.com/sites/articles/archive/2013/07/23/press-questions-gmo-safety.aspx  Visit the Mercola website for more on this issue.