Satan, Twisted, It's Not What You Think 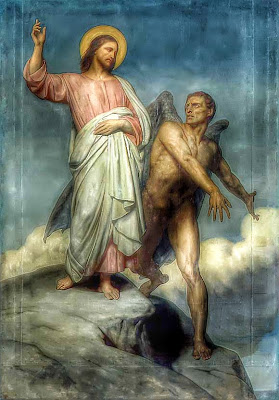 If any word of mine shall add to the number of the readers of this book I shall be glad to have written it; and I sincerely wish that all believers, and especially all ministers and Christian workers, might in some way be led to read it.

The subject is vital to any right understanding of the age in which we live, and of the personal conflict which we wage; for the existence, personality, and power of Satan are awful facts and of immense present significance.

We walk in the midst of his snares, hear on every hand his doctrines proclaimed by men of blameless lives "transformed as the ministers of righteousness," and are allured by the pleasure, place and power of his perfectly organized world-system.
I know of no other book on Satan in which the dispensational aspects of the subject are so clearly stated, nor any other so severely Biblical.
C. I. Scofield.

The world has been willing to comply with the wishes and projects of Satan to the extent of ceasing to believe that he really exists; this unbelief being most advantageous to his present undertakings. Yet the opinions of men have never changed the facts of revelation, and, according to Scripture, Satan exists; still possessed with great power and influence over the affairs of men—a power and influence to be increasingly dreaded as this present age advances.

The teachings of Scripture on this important subject are but little understood by Christians and seem to be entirely outside the thought of the world. It is, therefore, to be expected that any attempt to present this truth will seem, to many, mere folly and fiction.

The name Satan has by no means been lost. It has, however, been associated with a most unscriptural fancy. Without reference to revelation, the world has imagined a grotesque being, fitted with strange trappings, who has been made the central character in theatrical performances; and by this relation to the unreality of the theatre, the real character of Satan has come to be only one of the myths of a bygone age.
Scripture reveals a detailed description of the person and career of Satan; beginning with his creation; his original condition; his fall, and on to his kingdom with all its developments, and his final defeat and banishment. It presents a personage so mighty and so prominent in the world to-day that the Christian heart would fail, were it not for faith in the One who has triumphed over all principalities and powers.

This attempt to outline the Scripture teaching on this character will be undertaken under certain general conditions:
First—The authority of the Scriptures of both the Old and the New Testaments will be accepted without question.
Second—Evidence will be drawn from the Word of God alone, since no final light can be found on this subject other than it has pleased God to reveal in the Bible.

Third—There will be no discussion as to the actual existence of Satan; this being both assumed and taught from Genesis to Revelation.

These pages are prepared especially for believers; knowing that this body of truth will be wholly unnoticed or rejected by the Satan-blinded world (2 Cor. 4:4).

There has also been a deep sense of the seriousness of the undertaking: both because Satan, by his present direct power, would, if possible, hinder any larger understanding of his projects and purposes; and because so great a warning has fallen from the lips of Christ against the sin of ascribing to Satan the things which are really of God (Matt. 12:22-32).

The work has, therefore, been undertaken with some degree of reliance upon the keeping and guiding power of the Spirit of God, and is presented with the prayer that believers may have a clearer understanding of this important body of truth and be able to say with Paul, "We are not ignorant of his devices." It is also desired that some clearer vision of this mighty foe may be had which will cause the child of God to realize the overwhelming power of his adversary and be constrained to "be strong in the Lord and in the power of his might;" that greater victory may be had in the realization of the whole will of God.

Free download link.  Just pick the free user option and the file size is less than 1 meg so it should go very fast.

When we came upon this, the title is usually the type of area we stay away from .  As we read the opening however, we noticed that this was not what it appeared to be.  As we continued to read the opening, it grabbed our attention.  We have posted that opening here.  As we said in the title, it's not what you think.  That is why we decided to publish this.  You are more than free to download a copy so that you can read it whenever and where ever you want.