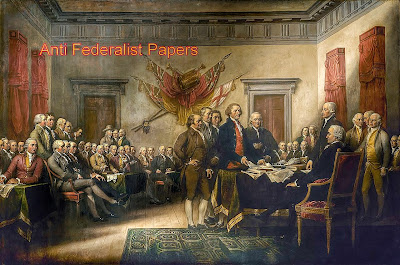 “ALFRED” defended the Articles of Confederation, taken from The New-York Journal, December 25, 1787 as reprinted from the [Philadelphia] Independent Gazetteer.

To the real PATRIOTS of America: . . . America is now free. She now enjoys a greater portion of political liberty than any other country under heaven. How long she may continue so depends entirely upon her own caution and wisdom. If she would look to herself more, and to Europe less, I am persuaded it would tend to promote her felicity. She possesses all the advantages which characterize a rich country-rich within herself, she ought less to regard the politics, the manufactures, and the interests of distant nations.

When I look to our situation-climate, extent, soil, and its productions, rivers, ports; when I find I can at this time purchase grain, bread, meat, and other necessaries of life at as reasonable a rate as in any country; when I see we are sending great quantities of tobacco, wheat and flour to England and other parts of the globe beyond the Atlantic; when I get on the other side of the western mountains, and see an extensive country, which for its multitude of rivers and fertility of soil is equal, if not superior, to any other whatever when I see these things, I cannot be brought to believe that America is in that deplorable ruined condition which some designing politicians represent; or that we are in a state of anarchy beyond redemption, unless we adopt, without any addition or amendment, the new constitution proposed by the late convention; a constitution which, in my humble opinion, contains the seeds and scions of slavery and despotism. When the volume of American constitutions [by John Adams] first made its appearance in Europe, we find some of the most eminent political writers of the present age, and the reviewers of literature, full of admiration and declaring they had never before seen so much good sense, freedom, and real wisdom in one publication. Our good friend Dr. [Richard] Price was charmed, and almost prophesied the near approach of the happy days of the millennium. We have lived under these constitutions; and, after the experience of a few years, some among us are ready to trample them under their feet, though they have been esteemed, even by our enemies, as “pearls of great price.”

Let us not, ye lovers of freedom, be rash and hasty. Perhaps the real evils we labor under do not arise from these systems. There may be other causes to which our misfortunes may be properly attributed. Read the American constitutions, and you will find our essential rights and privileges well guarded and secured. May not our manners be the source of our national evils? May not our attachment to foreign trade increase them? Have we not acted imprudently in exporting almost all our gold and silver for foreign luxuries? It is now acknowledged that we have not a sufficient quantity of the precious metals to answer the various purposes of government and commerce; and without a breach of charity, it may be said, that this deficiency arises from the want of public virtue, in preferring private interest to every other consideration.

If the states had in any tolerable degree been able to answer the requisitions of Congress-if the continental treasury had been so far assisted, as to have enabled us to pay the interest of our foreign debt-possibly we should have heard little, very little about a new system of government. It is a just observation that in modern times money does everything. If a government can command this unum necessarium from a certain revenue, it may be considered as wealthy and respectable; if not, it will lose its dignity, become inefficient and contemptible. But cannot we regulate our finances and lay the foundations for a permanent and certain revenue, without undoing all that we have done, without making an entire new government? The most wise and philosophic characters have bestowed on our old systems the highest encomiums. Are we sure this new political phenomenon will not fail? If it should fail, is there not a great probability, that our last state will be worse than the first? Orators may declaim on the badness of the times as long as they please, but I must tell them that the want of public virtue, and the want of money, are two of the principal sources of our grievances; and if we are -under the pressure of these wants, it ought to teach us frugality-to adopt a frugal administration of public affairs . . .

Since this is a small paper, we posted it in it's entirety here on the site.  We have our usual copy on SlideShare in the event you would like to download it or embed it on another site.