Gloucester, Va. (WAVY) - A man was found alive on the side of a Gloucester highway Monday after crashing on a motorcycle days before.

Virginia State Police was contacted Monday by the Gloucester County Sheriff's Office to investigate the discovery of a motorcycle crash, according to Corinne Geller with the VSP.

A 2002 Kawasaki motorcycle had been traveling west on Hickory Fork Road when it left the right side of the roadway and overturned about 20 feet from the wood line. The motorcycle slid several more feet into underbrush and struck several trees.

The motorcycle's operator, 28-year-old Daniel G. Cain of Gloucester, was found with broken bones and bug bites about 15 yards away from the highway. He was flown to Sentara Norfolk General Hospital with life-threatening injuries.

Cain's mother, Victoria Jurgensen, told WAVY.com last Wednesday night was the last time she'd seen him, as he left home on his motorcycle to grab a sandwich at a nearby Wawa.

"It's not like him, so we thought he went, saw a girl, he overslept," Jurgensen said. "We waited for him to call, no call, didn't call his boss, didn't call my husband, didn't call me."

Cain, an army reservist, didn't show up for duty over the weekend either.

"The military is his first love, and I knew something was wrong," said Jurgensen.

So she filed a missing persons report with the Gloucester County Sheriff's Office.

"I thought they would start looking for him, did they? No," she said.

Jurgensen took matters into her own hands and enlisted family and friends to search for her son. They searched over the weekend with no luck, but on Monday, family friend Kellie Green and Katrina Welch searched on foot down Hickory Fork Road -- the road to Cain's home. While walking -- and Green saw something.

"So I seen the shoe and I started walking a little further and I saw a pack of cigarettes, and then right here in this area I saw something shiny, and I picked it up and it was a mirror to a motorcycle," Green said.

Green and Welch went into underbrush and found Cain alive and his motorcycle, completely out of view from the highway.

"I was putting up fliers when I got the call from my husband: 'They found Daniel. You need to get back to Hickory Fork Road' ... 'he's alive,' that's all I could think," Jurgensen said.

Geller said the crash happened several days before Cain was found, but it is still uncertain exactly which day.

Jurgensen said her son is still recovering from his injuries.

The crash is still under investigation.
http://www.wavy.com/news/local/man-found-on-roadside-days-after-crash
Link back to WAVY TV10 where story originated.
Comments:
Comments from area citizens about the local county sheriff's office involvement are rather comical.  Where was the local concern? 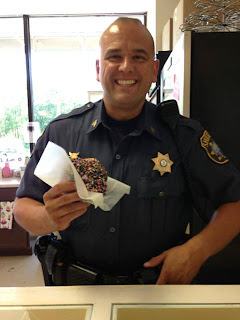 Were they all out having donuts and just didn't want to be bothered?  In all honesty, there are mixed reviews about local law enforcement.  There are some really good people with the department and there are some really bad ones.  So guess it depends on who you talk to when you ask for help.  If you get one of the bad one's, what do they care?  If you get one of the good one's, you can never thank them enough as they have shown to go out of their way for local residents.  Plus anyone can have an off day.  Not an excuse, but it still happens.

It's a shame that these folks had to experience the bad side of local law enforcement.  Thank God this guy was found still alive and our prayers go out to him and his family.  Looks like the local Sheriff's office has some community repairs to make to their image now.